A while back David asked me to open a post on new potion/scroll ideas. Well, here it is 🙂

To start things off, here are a couple of potion ideas I came up with. (To clarify — these are not planned features at the moment, they are just ideas. Any feedback welcome.)

Now your turn. What new magic effects would you like to see in the game?

Wilson Tang has created a port of Knights for Maemo, a mostly opensource mobile platform for tablets (wifi touchscreen devices without phone capability).

The packages are available here: http://repository.maemo.org/extras-devel/pool/fremantle/free/k/knights/

And the creator’s site, with screen shots: http://sites.google.com/site/wil7ang/projects/maemo/knights

The screen layouts have been changed a little bit to fit the Maemo platform, but otherwise it is basically the same as my version.

This is a quick progress report on what I’ve been doing for the next version of Knights (011).

The following changes have now been completed:

The work still to be done is:

I’ll try to get these done next weekend.

I made a graph of Knights downloads over time and I thought people might be interested to see the results. 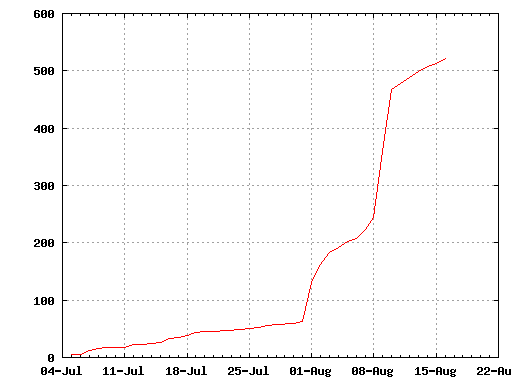 This shows the cumulative number of downloads of Knights version 010 since its release on 5 July. Both the Linux and Windows versions are included.

The spike at the beginning of August is when the game found its way onto the Linux Game Tome.

The second spike (8 August) is when the game was announced on reddit. This caused a massive increase in hits for about a 24 hour period, which then seemed to die down again quite suddenly (I guess it dropped off the front page or something).

As you can see the game is gaining in popularity – downloads have reached 500 and are still increasing. Hopefully this trend will continue 🙂

I have been thinking about how to proceed with Knights development. For me the next priority is to try to get a bit more publicity for the game, as it really deserves to have more players. However before I do that I’d like to make one new version with a few interface improvements. Specifically:

After those are done I think the game will be ready to be taken to a wider audience, so I’ll try submitting it to a few indie game review sites and see if any of them want to cover it. That should hopefully bring in a few new players.

If we get enough players, I’d also like to run an online Knights tournament sometime. (As of right now it doesn’t look like there would be enough people for a very interesting tournament.)

Looking further forward, there are still some further interface type improvements that could be made. For the record these are:

Then there is the question of gameplay changes. I think the most promising suggestion so far is to allow more than two players at once. This would probably need new quest types (and plenty of play testing) but it could be quite an interesting direction to go in.

Finally, as I’ve said before, I’m working on a room editor – however this is a lower priority as I’d like to focus on the main game, at least for now.

I’m going away for a week from the 18th, so work on the next version won’t start until I get back (on the 25th). This will probably take around a month (depending on how much free time I get) so look out for a new version sometime in August.

I’ve been taking a bit of a break from Knights development recently, but I hope to start work on it again soon. The first task will be to do a new release (version 011) which will just fix one or two minor bugs that are still outstanding.

After that, I thought it would be fun to try to add some new features to the game. Someone suggested new monster types. I’m not sure exactly what monsters I would add right now, but I tried to think up some ideas, and, well, here they are. (Disclaimer: these are really just random initial ideas – not to be taken too seriously at the moment…)

What do you think? Good? Bad? You have other ideas? Please post them in the comments 🙂

Another point is that I am no good at graphics, so before I could add any monsters, I would need someone to knock up a few sprites for me. If there are any artists out there reading this, who would be willing to help, then please feel free to contact me…

Welcome to the new Knights development blog. I will be keeping this up to date with announcements of new Knights releases, and other news of interest to Knights players. I also plan to discuss future Knights developments here, so if you’d like to see what’s going into the next version then please do keep an eye on this blog.

I also plan to use the blog as a means of getting feedback from users, so if you have any comments – whether they are bug reports, ideas for new features, or just general comments – then please do post them here (or drop me an email if you prefer).

Today also sees the release of version 010 of Knights. This is a bug fix release containing the following improvements: