Knights version 016 has been released!

The main new feature is the addition of a new mouse-and-keyboard control system. The idea behind this is to try to make the game a bit more user-friendly for newbies. Although I think there is still more work to do in this area — e.g. a better tutorial might be nice — I think the new controls are a good start and hopefully will allow more players to enjoy the game.

If you have any comments on the new controls, or ideas for improvements, please feel free to comment below.

Next on the agenda is improving modding support (including Lua scripting) so that people can make their own mods for Knights.

Has it really been 6 months since the last release? I hadn’t realised it was that long. It seems that with real life, job, etc, getting in the way, I just don’t have as much time to work on Knights as I would like. Oh well… I do what I can…

Anyway this is just a quick note to say that I’m working on the next release. This is being slightly held up by documentation — I need to update the manual to describe the new controls, and the new settings on the options screen. (This means taking some new screenshots as well as updating the text.) This is a slightly boring job but hopefully should get it done fairly soon. Then it’s just building the code and packaging it up for release. I’m aiming to complete this by Saturday or Sunday if all goes well.

Finally I’ve got the new “action bar” control system finished. I have spent quite a lot of time polishing things, fixing bugs etc., and I’ve even drawn a couple of new icons for things that didn’t have icons in the original Knights, as you can see in the screenshot below (click to enlarge). 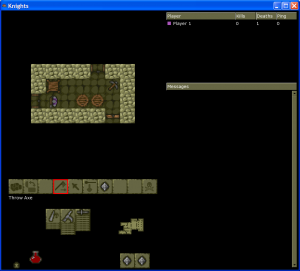 Note the new skull-and-crossbones icon (for suicide; there is no separate suicide key in the new system) and also the “Throw Axe” icon. As you can see, when you mouse-over an icon, it highlights in red and a text description appears telling you what the icon does. (OK, well, you can’t actually see the mouse pointer in the screenshot, but never mind.)

One thing I haven’t done is got rid of the “approaching” system. I did do some experiments in this area but decided to leave approaching in for the moment. This is mostly for reasons of time — I want to get a release out soon and I haven’t had time to finish off the “approach-less” controls yet. I might have another go at this in a future release though.

So the next priority is to get a release out so that people can test the new controls. After that, the next major step is going to be Lua scripting — both documenting what has been done so far, and then pushing to make much more of the game scriptable, so that meaningful mods can be created.

Look out for a release soon 🙂